A blog for (semi) athletic middle-aged men (and women) holding on to (the last vestiges of) their youth
by training for and competing in running, cycling, swimming and triathlon events!

Just six weeks into her new job, the new ride director for Ride the Rockies, Deirdre Moynihan (the second new ride director in as many years) announced major changes for the 2018 tour (June 9-15). In an email sent today to previous RTR participants, Moynihan dropped a couple of big bombshells:

First, the LOTTERY IS DEAD! Ride registration will be FIRST COME, FIRST SERVE, beginning as soon as the route is announced on Saturday, February 3, at approximately 8:30 PM Mountain Time. The route will be announced live on Facebook for anyone who is unable to attend.

Third, reading between the lines, according to the email, the new director spent her first day on the job -- November 15 -- on the road planning the 2018 route. I have no idea when the previous director left or what has been going on with staff but planning a route in November for a ride in June seems like a potential problem.

That's a lot to absorb. We're being asked to sign up, on the spot, for a route that may not even be set at this point. I'm trying to keep an open mind but am thinking 2018 may be a good year to take a pass on Ride the Rockies and check out another ride.

Any suggestions? What do you think, Jonny Rocker?

Daren
Posted by Daren Williams at 8:07 PM No comments:

Email ThisBlogThis!Share to TwitterShare to FacebookShare to Pinterest
Labels: cycling, Ride the Rockies

Cycle Oregon 2017 Cancelled Due to Wildfires

With all the media attention focused on Houston this week I completely missed the fact that Oregon is on fire. That is until I received an email announcing the cancellation of Cycle Oregon 2017, set to begin one week from today. "Oregon is in crisis," began Cycle Oregon Executive Director Steve Schultz in the email, citing these alarmng facts:
According to the email, the heaviest fires are in South Central Oregon, essentially encompassing the 2017 route. At this five of the seven days are impacted by fires and smoke with air quality levels ranging from unhealthy to hazardous. As a result, Steve and his team, along with the Oregon Department of Forestry, the U.S. Forest Service, and others, were forced to cancel the ride.

I can't image the disappointment Steve and his team must be feeling. The years of planning, all the moving parts coming into place, hundreds of volunteers, food vendors, port-a-potty purveyors, etc., seemingly all for naught. But clearly they were left no choice.

I also sympathize with the riders who have been training for months, many planning to travel from around the world next week to Oregon. I am not one of them, choosing to do Ride the Rockies as my big ride this year, but I know the feeling of anticipation leading up the the big event of the year. Hard to imagine getting the news one week out. But the decision was made with everyone's safety in mind, especially the riders.

I have experienced much less severe conditions on Ride the Rockies, encountering a small fire on my first RTR in 2007 and circumventing the Royal Gorge fire on the 2013 ride (making it the longest in RTR history)!

But neither of those situations threatened the safety of the riders. They were able to reroute us around the Royal Gorge fire. But in this case, even alternate routes are affected, according to Schultz.

I hope the disappoint fades quickly and look forward to next year's route announcement!

Daren
Posted by Daren Williams at 8:44 AM No comments:

Ride the Rockies 2017 Days 6-7: Montrose to Gunnison to Salida and the finish line!

The final two days of Ride the Rockies 2017 were a mix of easy cruising and tough climbing. The final day's climb over Monarch Pass (elev. 11,312') was the longest (and highest) of the ride, climbing nearly 3,000 feet in nine miles, but the 23 mile descent into Salida was truly all downhill and flew by. Just like that, my 10th RTR was over.

Crossing the finish line is always bittersweet. The feeling of accomplishment is fulfilling. Then suddenly it sinks in. The ride is over. No more pain and suffering through long climbs. No more adrenaline rush screaming down the backside of a mountain pass at 45 mph. No more sitting at the local brewery telling tall tales of the day's ride. I will miss it all.

No more camp to set up or tear down, backpacks to carry to the truck, smelly port-a-potties or shower trucks. OK, some things I won't miss!

The ride out of Montrose towards Cerro and Blue Mesa Summits was very typical. I have ridden this stretch of road three times and all I remember is the headwind blowing down the mountain. But my legs felt fresh from the recovery day ride from Ridgeway to Montrose and after we dropped into the Curecanti National Recreation Area we were greeted by a nice tailwind that blew us around Blue Mesa and up the Gunnison River to our destination.


We met up with Team Bar2Bar members at High Alpine Brewing Company and enjoyed some artisanal pizza and local brews before heading to the school to set up camp. After cleaning up we headed back into town for dinner and ended up the night drinking buckets of PBR tall boys playing corn hole on the patio at Timbers (with a private band all to ourselves!).

Day 7: Gunnison to the Salida (and the finish line!)

The final day began with a nice, steady 1-2% grade climb up Tomichi Creek for 34 miles before beginning the climb over Monarch Pass. I did this climb on my first RTR in 2005. I remember being terrified by the elevation profile of this day. The climb is a steady, relentless 4-7% grade for nine miles. I struggled a little on the steepest parts. At 40+ pounds fully loaded, the Beef Bike is a beast!
﻿

Dropping into my granny gear for tough sections I spun my way up the mountain. Reaching the summit of Monarch Pass marked the end of the climbing. Though we often say "it's downhill from here," I truly think we could have coasted without peddling the entire way. But peddling along at 30+ mph isn't hard work!

We made our final unofficial pit stop at Elevation Brewery in Poncha Springs, about 4 miles from the finish line. Grouping up there, our team coasted across the finish line. We hung around for the closing ceremony to thank the volunteers, staff and Colorado State Police for keeping us safe throughout the ride and making it possible to tour the rugged Rocky Mountains on a bicycle.

Then came the hugs and goodbyes and the end of another adventure. So now the inevitable question. What's next? Jonny Rocker and I plan to check out other weeklong rides around the country. Please leave a comment with your favorites!

With that, I will leave you with our team motto: Ride fast and take chances!

Posted by Daren Williams at 9:05 AM No comments:

Is Bison Leaner Than Beef? Whatever, Turkey! 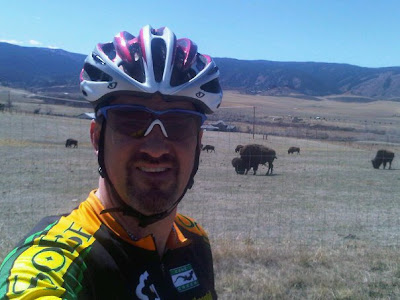 The BEEFMAN Before and After 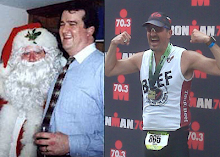 That's me weighing 270 lbs. in 1995 and in 2011 at just over 200. I've kept the weight off for 20+ years but keep this photo as a daily reminder of why I get up in the morning to swim, bike and run...and eat BEEF every day to provide fuel for physical activity!

The BEEFMAN's Favorite Blogs and Websites